Drought and Wildlife in Arizona

Drought and Wildlife in Arizona

About Our Drought Response and How You Can Help

How does drought impact wildlife?

Water is wildlife’s most important resource and it’s vital for more than just quenching thirst. 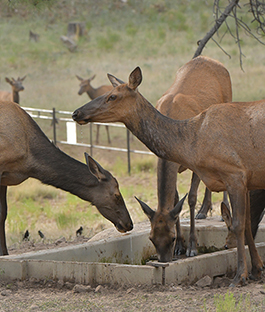 The longer a drought lasts the more physical stress it can place on wildlife, lowering their reproductive success, and leaving them less able to survive the regular challenges of a life in nature.

Fewer water sources cause wildlife to congregate in singular locations, increasing the risk of predation and the spread of disease. Animals may also seek water in places that are less safe for them, like our urban or agricultural environments.

How does AZGFD work to mitigate the impact of drought?

AZGFD works year round to mitigate the impact of drought on our state’s wildlife. Nearly every role in the agency plays some part in AZGFD’s drought mitigation efforts.

What impact have AZGFD’s drought response efforts had?

AZGFD’s efforts have had a meaningful impact on Arizona’s wildlife.

What are the challenges in implementing the agency’s drought response efforts?

Heavy rainfall does not end the drought.

A few consistent wet seasons would also not immediately resolve the effects of Arizona’s long-term drought.

Knowing drought will not be quickly resolved, AZGFD continues to implement its agency-wide response, but wildlife conservation is not free.

Donations play a large role in the sustainability of these efforts, but as greater efforts are needed, costs continue to increase.

How can the public support AZGFD’s drought response efforts?