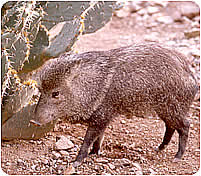 Though some people think javelina are a type of wild pig, they are actually members of the peccary family, a group of hoofed mammals originating from South America. Javelina are common in much of central and southern Arizona, including the outskirts of the Phoenix area, most of Tucson, and occasionally as far north as Flagstaff. Javelina form herds of two to more than 20 animals and rely on each other to defend territory, protect against predators, regulate temperature and interact socially. They use washes and areas with dense vegetation as travel corridors. Javelina are most active at night, but they may be active during the day when it is cold.

Javelina will likely visit occasionally if you live in a semi-urban area near a wash or other natural desert. Javelina usually cause only minor problems for people by surprising them or eating a few plants. However, people should NEVER feed javelina. This can cause them to become regular visitors and lose their fear of people, creating problems for the neighborhood and often leading to the death of the javelina. Javelina occasionally bite humans, but incidents of bites are almost always associated with people providing the javelina with food. Javelina can inflict a serious wound. Defensive javelina behavior may include charging, teeth clacking, or a barking, growling sound. Javelina may act defensively when cornered, to protect their young, or when they hear or smell a dog. Dogs and coyotes are natural predators of javelina, and they can seriously hurt or kill each other. Javelina around your home may also inadvertently attract mountain lions, because mountain lions prey on javelina.

If javelina have become a problem or have caused property damage, see the suggestions below to deal with the situation. Do your part to keep javelina healthy and wild because their removal almost always means death. Work with your neighbors to achieve a consistent solution to the problem.

To discourage a javelina, immediately

Removal usually results in the death of the javelina. In some cases, the javelina cannot be moved to a different location because it may have a disease or attacked a person. Research shows that most javelina do not survive a move to a different area due to inability to find food, water and shelter; being separated from the herd; being killed by a car, predator or other javelina while defending its territory; or reaction to the capture. When property damage from javelina is severe and/or repetitive, and the possible attractants have been removed and other measures have been attempted and failed to resolve the problem, the Arizona Game and Fish Department may determine that a javelina should be removed from an area. Also, wildlife control businesses are authorized to use repellents to deter javelina.

Rabies – Javelina can catch rabies, although they do not generally carry it without symptoms. Symptoms of rabies can include foaming at the mouth; erratic, hyperactive behavior; and/or fearful, paralyzed and lethargic behavior. If you see any animal with rabies symptoms, call 911 or your local Arizona Game and Fish Department office right away.

Anyone bitten by a javelina must immediately seek medical attention from a qualified health care provider. Whenever possible, the animal should be captured or killed and sent to a laboratory for rabies testing.

Distemper – Javelina are known to catch distemper, which can be transmitted to pets. Distemper is a viral disease that consists of fever, loss of appetite, coughing, and eye and nose discharge.

Salmonella – Salmonella or other bacteria that commonly cause food poisoning sometimes take a toll on javelina herds. Symptoms include diarrhea, inability to walk, staying close to a water source, and death.