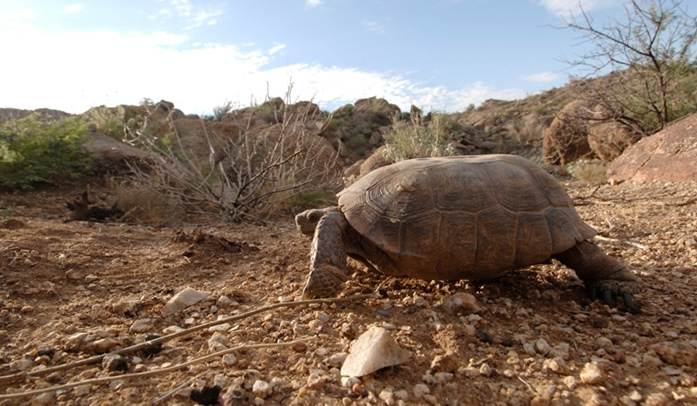 Resources for the public

The desert tortoise is an herbivorous and completely terrestrial turtle with a brown, high-domed shell and stout, elephantine legs. One of six members of the testudinidae family in North America, the desert tortoise inhabits the desert ecosystems of the southwestern United States and northern Mexico.

The desert tortoise has many remarkable behaviors and traits that make it well-suited for life in the desert. Because it is ectothermic, it controls its body temperature by using a shelter. The shelter protects the tortoise from the extreme heat or cold of the desert. It provides a constant climate that keeps the tortoise cool when the weather is hot, and shelters it from freezing temperatures during hibernation in the winter.

A desert tortoise may spend up to 95 percent of its life in shelters, only emerging to feed, bask and breed when the weather allows, mostly during the monsoon season, typically July – October. In fact, it will get most of its food for the entire year during this period. It eats the leaves, stems and flowers of many species of desert plants. Surprisingly, it is able to digest many species of plants that are indigestible to other animals with help from bacteria that reside in its digestive system. 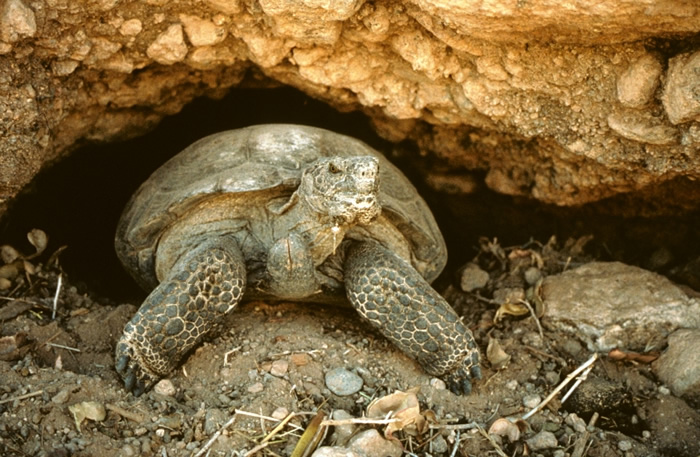 A desert tortoise emerges from its burrow

Another adaption that makes the desert tortoise suited for desert life is the ability to acquire almost all of its water from the plants that it eats. Because desert tortoises live in an arid climate where most of the rainfall occurs during the monsoon season, it is able to store water in its bladder for use during drought and can go more than a year without drinking. One of its defense mechanisms when handled or disturbed is to release the contents of its bladder, which can deplete its water supply and can cause harm or death during a prolonged drought. For this reason, if you find a desert tortoise, do not pick it up.

As an adult, it has very few natural predators because of its thick, scaly skin and hard shell. In the Sonoran desert, mountain lions are the main predators of adult desert tortoises. The species is under increasing pressure from landscape development, the construction of roads and other human activities.

Adult desert tortoises are generally solitary animals and individuals of the same sex may engage in combat when they cross paths in the wild. Males can be especially combative and have enlarged gular scutes, two large scales that grow outward from the front of the plastron, just under the head and neck of the tortoise. They use the gular scutes to ram and flip other males. If this happens the overturned tortoise must right itself soon, or it will die from suffocation, exposure to the sun, or freezing. 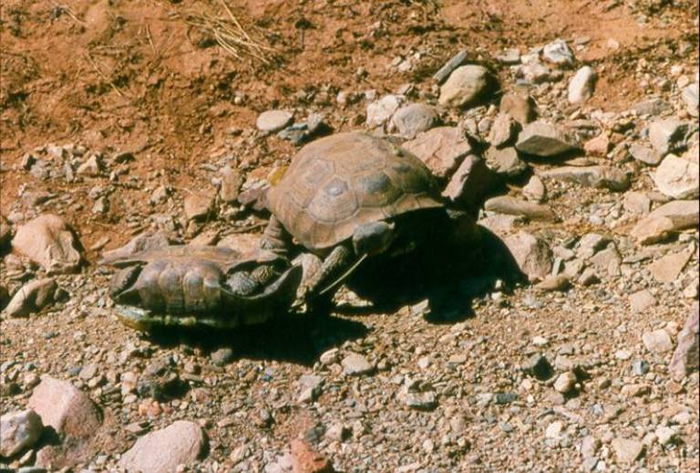 The male desert tortoise on the left was flipped over during a battle with the other male.
This type of defeat can determine territorial and mating disputes.

Sonoran desert tortoises can reproduce after they reach 12 to 20 years of age. Mating typically occurs during the summer, late June through July, after the onset of the monsoon season. Females will lay on average a single clutch of  3 to 12 eggs in a nest near or inside the entrance of a shelter. Mojave desert tortoises usually lay two clutches of eggs per year. Hatchlings emerge towards the end of the monsoon season in September or October. A hatchling desert tortoise is small (2-3 inches in length) and soft-shelled. It has many predators, including raptors, ravens, coyotes, foxes and bobcats. 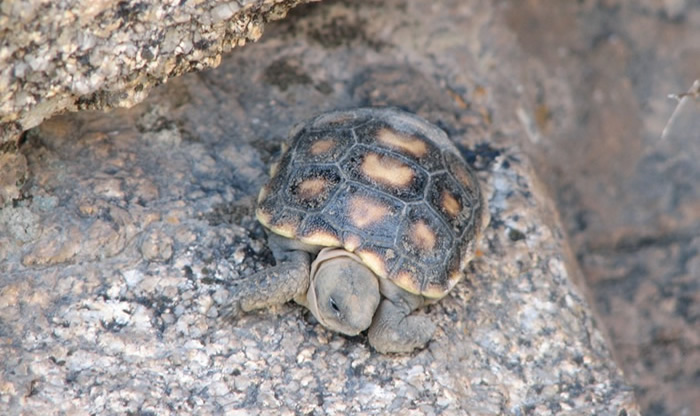 Each species favors different habitats because they have evolved separately across a large range. The Mojave tortoise inhabits Mojave desertscrub, where it is generally found in the flat inter-montane basins. The Sonoran tortoise, found in Sonoran desertscrub and semi-desert grassland, prefers rocky slopes and bajadas.

Primary threats to survival of the desert tortoise are related to loss and degradation of the species’ habitat, through drought, wildfire, habitat destruction and fragmentation, and invasion of exotic plant and wildlife species. Other impacts to the species include removal of individuals from the wild, vandalism, mortality from vehicles, irresponsible off-highway vehicle (OHV) use, release of captive tortoises into the wild and disease.

The desert tortoise and other North American tortoise species can become infected with a disease called Upper Respiratory Tract Disease (URTD), caused by a Mycoplasma spp. bacterium. URTD causes cold-like symptoms in tortoises. A tortoise can become infected when it comes into contact with a sick tortoise. Once a tortoise is infected with this pathogen it will be a carrier for life. The symptoms may go away, but can re-emerge if the tortoise is under stress.

The Arizona Game and Fish Department is coordinating with local, state and federal agencies and private landowners to conserve and manage the desert tortoise in Arizona. In 1985, these groups formed the Arizona Interagency Desert Tortoise Team (AIDTT), which is responsible for coordinating research and management of the desert tortoise in Arizona.

Mojave and Sonoran desert tortoises are protected throughout Arizona. Since 1988, it has been against Arizona State law to harass, harm, pursue, hunt, shoot, wound, kill, trap, capture, or collect this animal in any part of the state. It is also illegal to attempt to engage in any such conduct. The Mojave desert tortoise was listed as threatened by the United States Fish and Wildlife Service (USFWS) in 1990.

Per Commission Order 43: possession limit is one desert tortoise per person per household.