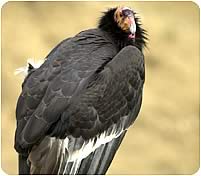 California condors Gymnogyps californianus, are the largest flying land bird in North America. Condors are members of New World vultures, Family Cathartidae, and are opportunistic scavengers that feed primarily on large dead mammals such as deer, elk, bighorn sheep, range cattle, and horses. Condors have a wingspan of 9 ½ feet, and can weigh up to 25 pounds as adults. Using thermal updrafts, condors can soar and glide up to 50 miles per hour and travel 100 miles or more per day in search of food. California condors are not sexually dimorphic like a majority of raptors, i.e., males and females are identical in size and plumage. Adult condors are primarily black except for bleach white feathers in a triangle-shape pattern beneath their wings (underwing covert feathers). These patches are highly visible when condors are flying overhead and are a key identification characteristic. Adult condors have pinkish-orange featherless heads, ivory colored bills, and the sclera of the eye is red. Juvenile condors are also mostly black with underwing coverts that are mottled gray in color also but triangular shaped like adults. Juvenile condors have dark colored heads until they are about 3 to 4 years old when the head starts to turn pink. The juvenile bill is black and changes to an ivory as the bird matures.

Condors are long-lived species with low reproductive rates. They can live up to 60 years in the wild, and become sexually mature at six or seven years of age. Condors mate for life and females lay a single egg, about five inches in length and weighing around 10 ounces, every other year. Male and female condors share incubation shifts. Condors are cavity-nesting birds. Most nest sites have been found in caves, on rock ledges, or in tree cavities. Condors do not build nests; instead, the egg is deposited on the floor of the cave, ledge, or tree. The egg hatches after about 56 days of incubation and both parents share responsibilities for feeding the nestling by regurgitation. Young condors fledge at five to six months of age, but may stay in the nesting area for up to one year.

In prehistoric times, condors ranged from Canada to Mexico, across the southern United States to Florida, and on the east coast in New York. During this period, condors were a common resident of the Grand Canyon based on bones, feathers and eggshells found in caves where they nested. A dramatic range reduction occurred about 10,000 years ago, coinciding with the late Pleistocene extinction of large mammals such as mastodon, giant sloth, camels, and saber-toothed cats that condors fed on. By the time Europeans arrived in western North America, condors had retreated to a stronghold along the Pacific coast from British Columbia to Baja California. The birds managed to maintain a strong population perhaps due to large sea mammals that washed upon shore, however, the settlement of the west, shooting, poisoning from lead and DDT, egg collecting, and general habitat degradation began to take a heavy toll. Between the mid- 1880s and 1924, there were scattered reports of condors in Arizona with the last sighting near Williams Arizona in 1924. By the late 1930s, all remaining condors were found only in California and by 1982, the total population had dwindled to just 22 birds. The only hope was to begin captive breeding of California condors and to initiate reintroduction of the species. Reintroduction of captive bred condors began in 1992 in California, and 1996 in Arizona.

In order to be downlisted from Endangered to Threatened, The Recovery Goals of the California Condor Program are as follows:

Condors are cavity-nesting species that require caves, ledges, or large trees in order to nest. High perches are necessary for roosting, as well as to create the strong updrafts required for lift into flight. Open grasslands or savannahs are important to condors while searching for food. In Arizona, condors are found at elevations between 2,000-8,000 feet, and the reintroduction site is located in the northern part of the state on Vermilion Cliffs

The Vermilion cliffs are rugged sandstone cliffs located on public land administered by the Bureau of Land Management. These cliffs are located on the Paria Plateau and provide the necessary remoteness, ridges, ledges, and caves favored by condors. The Paria Plateau is typified by Great Basin Conifer Woodland, dominated by juniper (Juniperus spp.) and pinyon (Pinus spp.) Great Basin Desertscrub occurs along the Vermilion Cliffs and is dominated by sagebrush (Artemisia spp.) and rabbitbrush (Chrysothamnus spp.). Species diversity is low, with shrubs occurring more frequently than woodland or forest.

Current condor distribution is limited to three major reintroduction sites. These include reserves in California located in Ventura, Santa Barbara, Kern, Monterey and San Luis Obispo counties. In northern Arizona, condors are located primarily near the Vermilion cliffs and Grand Canyon. A third reintroduction area was added in 2002, which is located in a remote area of Baja California, Mexico.

To view the condor release site in Arizona, drive north on Highway 89 out of Flagstaff, Arizona. Turn left onto Highway 89A toward Jacob Lake and the North Rim of the Grand Canyon. Drive approximately 40 miles (past Marble Canyon, Vermilion Cliffs, and Cliff Dwellers), turn right onto House Rock Valley Road (BLM Road 1065) just past the House Rock Valley Chain Up Area. Travel approximately 2-3 miles to a condor kiosk and shaded viewing area on the right. Atop the cliffs to your east is the location where condors are released, and a good place to see condors year round. In winter months, condors frequent the Colorado River corridor near Marble Canyon and in summer months, condors are seen frequently at the South Rim of the Grand Canyon.

California condors are one of the most endangered birds in the world. They were placed on the federal endangered species list in 1967. In Arizona, reintroduction was conducted under a special provision of the Endangered Species Act that allows for the designation of a nonessential experimental population. Under this designation (referred to as the 10(j) rule) the protections for an endangered species are relaxed, providing greater flexibility for management of a reintroduction program.

As a result of the continued downward spiral of the condor population in the 1980’s, one of the longest wildlife recovery efforts ever attempted began. The U.S. Fish and Wildlife Service began a captive breeding program in 1980, teaming with the Los Angeles Zoo and the San Diego Wild Animal Park. In 1987, a controversial decision was made to bring all remaining condors (22 individuals) into captivity and the last wild bird was captured on April 19, 1987.

All hope for condor recovery was now placed on captive breeding programs, and the task was formidable. Because recruitment into the population is very low, captive breeding techniques were developed in which eggs are removed as they are laid, usually causing the captive condors to lay a second and sometimes third egg. The extra eggs are incubated and chicks are raised by caretakers using a hand puppet shaped like a parent condor head. The puppet prevents the young condors from imprinting on people. Condor chicks that are not raised by puppets, are raised by their parent birds. As a result of captive breeding, condor populations have increased dramatically from 22 birds in 1987 to more than 270 birds in 2005.

Condor Numbers as of December 2021

Captive bred condors were released back into the wild in California beginning in January 1992. Today, about 100 condors fly free in designated California sanctuaries. With recovery going well in California, management efforts turned to the establishment of a second geographically separate condor population in Arizona. This effort would offer insurance against loss of the species through a single catastrophic event, and return condors to an additional portion of its historic range. Beginning in 1985, discussions began in The Arizona Game and Fish Department’s Nongame Branch to determine the feasibility of reintroducing California condors in Arizona. By 1989, potential release sites were being surveyed and regular scoping meetings with the U.S. Fish and Wildlife Service had begun. In 1994, The Vermilion Cliffs were identified as the best release site.

In October 1996 six birds were transferred from captive breeding facilities to an acclimation pen on top of the Vermilion Cliffs. Before release each condor was fitted with two radio transmitters and individual number tags. Transmitters and number tags were affixed to the patagium (a section of skin and tendons that lies along the leading edge of the wing) of each condor’s wing. On December 12, 1996 six condors were released atop the Vermilion cliffs. This was the first time condors had been seen in Arizona since the early 1900’s.

Since December of 1996, program personnel have soft-released approximately 6-10 birds per year. Each condor carries two radio transmitters (conventional and/or satellite transmitters) and are monitored daily by up to 10 field biologists. There are now over 70 condors flying free in Arizona.

1- Never try to approach or feed condors. Use binoculars and spotting scopes to observe condors from a distance.

2- Never stop, excessively slow down, or view condors on Highway 89A. Use pullouts along the road to search for and view condors.

3- If you observe anyone harassing or harming a condor, call