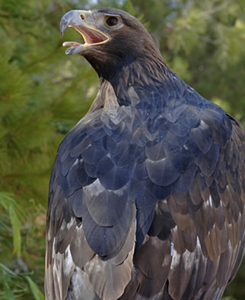 In 1940, Congress passed the Bald Eagle Protection Act to protect declining bald eagle populations (Haliaeetus leucocephalus). In 1962, this act was amended to include golden eagles (Aquila chrysaetos), becoming the Bald and Golden Eagle Protection Act (Eagle Act). In 2007, the U.S. Fish and Wildlife Service (USFWS) codified the definition of “disturb” under the Eagle Act. Disturb includes any action that “causes, or is likely to cause…injury to an eagle” or by “interference with normal breeding, feeding, or sheltering behavior causing a decrease in productivity or nest abandonment”. In 2009, the USFWS also finalized regulations to provide a mechanism to authorize take under the Eagle Act. However, for implementation of take permits to be compatible with the congressional intent of the Eagle Act (i.e., stable or increasing breeding populations), accurate population estimates are needed.

Unfortunately, very little information existed about the population size, habitats, habits, or basic vital rates for golden eagles in Arizona. In June 2010, the Arizona Game and Fish Department formed the Southwestern Golden Eagle Management Committee which comprised of 17 state, federal, private, and tribal entities. Through this partnership, the Department was able to secure funding for statewide golden eagle surveys which consisted of a 2-year nest search, 2-year occupancy assessment, and on-going productivity assessment.  Results of these survey efforts are available in the annual technical reports below. Any additional questions or sightings can be directed to goldeneagle@azgfd.gov.