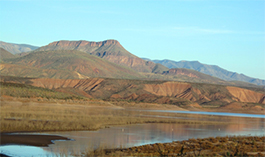 Roosevelt Lake is the largest lake in central Arizona and lies within the Tonto Basin, a low elevation Sonoran desert scrub habitat zone. The Arizona Game and Fish Department (Department) does not own property at the Roosevelt Lake Wildlife Area (RLWA), but rather cooperates with the Tonto National Forest (TNF) on special management actions within this area.

The Roosevelt Lake wildlife area is managed under a Cooperative Agreement among the TNF, the Salt River Project and the Department. The primary purpose for management of the area is to provide enhanced and safe feeding and loafing habitat for the overwintering Rocky Mountain population of Canada geese.

Roosevelt Lake wildlife area is a large area, approximately 78,000 acres along the north and west shores and lake areas of Roosevelt Lake in the vicinity of the confluence with Tonto Creek. The Department also cooperates with the U.S. DOI-Bureau of Reclamation to operate a Roosevelt Goose Forage Plot on the Rock House Farm property.

Recreational Opportunities – Day Use Only

Camping: Individuals can camp on the shores of Roosevelt Lake, in developed campgrounds. America the Beautiful Passes are only accepted at the Picnicking Sites. Campground fees at various sites around Roosevelt Lake might be separate from the Tonto Daily and Discovery pass. Please call Tonto Basin Ranger District for specific details or visit individual websites.

Fishing: Sport fish opportunities include largemouth and smallmouth bass, channel catfish, flathead catfish, bluegill, crappie and carp. Roosevelt Lake has few rivals in Arizona for producing trophy fish. Previous records for both largemouth (14 lbs. 8 oz.) and smallmouth bass (7 lbs. 4 oz.) are catches taken from this lake. Catfish weighing in excess of 60 lbs. have been caught here. Crappies weighing in excess of one pound are routinely caught.

Hunting:  The Roosevelt Lake wildlife area is made up of the Game management units 22, 23 & 24B. 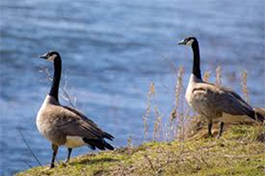 Besides overwintering Canada Geese, other wildlife abounds in the RLWA. Most prominently,  bald eagles nest in cottonwoods near the mouth of Tonto Creek, which is also the host location for a number of nesting endangered Southwestern willow flycatchers. Other waterfowl, quail, mule deer, coyotes, raccoons, bobcats, rabbits, etc. are found in abundance within the RLWA due to the availability of water and diverse habitats.

Amphibians and Reptiles: Amphibian species likely present within the RLWA include the red-spotted toad, Woodhouse’s toad, great plains toad, Sonoran Desert toad, canyon tree frog and Mexican spadefoot. Low desert dwelling lizards, including Gila monsters can be found in the uplands around the lake, as well as rattlesnakes, coachwhip, garter snakes, king snakes, and many other species of non-venomous snakes.

Plants and Vegetation: Lakeshore vegetation in undisturbed areas is composed of saguaro, mesquite and palo verde.  Near the lakeshore, fluctuating water levels result in a “bathtub ring” of early successional habitats which can vary considerably from year to year, depending on recent water levels and precipitation regimes.  In general, this zone tends to be vegetated with cockle burr, Bermuda grass, and other annual grasses and forbs. If lake levels have not risen into this zone for several years, some intrusion by mesquite and other shrubs can occur.  It is the Bermuda grass and annual forbs and grasses that provide a major food source for geese each winter.