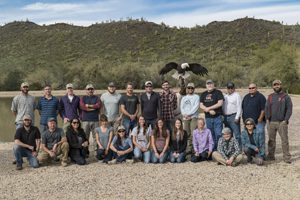 Many land and wildlife agencies recognize the conflicts between increasing metropolitan populations, recreation, and breeding bald eagles. In Arizona, the most productive breeding areas are located near urban and high recreation areas, thus increasing the need for protective management. In 1978, these concerns led to the creation of the Arizona Bald Eagle Nestwatch Program (ABENWP). Beginning as a weekend volunteer effort by the U.S. Forest Service and Maricopa Audubon Society, the ABENWP has expanded into contracting 20 biologists annually to monitor breeding activities daily (22 days each month). The goals of the program are public education, data collection, and conservation of the species.

Beginning in February, nestwatchers are stationed at 10 to 15 breeding areas with the highest recreation pressures. They interact with members of the public, educate them on breeding bald eagles, distribute brochures, and direct them away from the breeding area. Nestwatchers collect data on breeding behavior, human activities, and habitat use to help agencies make better management decisions. Determining when bald eagles are in a life threatening situation is possibly the most tangible benefit of this monitoring. This recognition enables biologists to intervene and eliminate/reduce the threat, thereby increasing productivity. From 1983 to 2005, the ABENWP has helped rescue and return to the wild 49 nestlings and eggs, representing 9.4 percent of all young fledged in Arizona.

To determine population trends nationwide, the National Wildlife Federation initiated an annual bald eagle winter count in 1979. Each year the states are responsible for the completion of standardized survey routes, which are now compiled by a national coordinator at the U.S. Geological Survey. After participating from 1981 to 1985, the Arizona Game and Fish Department resumed the winter count surveys in 1992, established 115 routes statewide in 1995, and amended the routes to 105 in 2006. Federal and state agencies, Native American tribes, and private groups assist annually in conducting the survey during a one-week period in January.

The winter count yields information on bald eagle age classes, numbers, and habitats. During the winter, Arizona averages 322 bald eagles, composed of 64 percent adults and 33 percent immature birds from 1995 to 2005. Bald eagles rarely concentrate in large numbers in Arizona as is common on other wintering grounds around the nation, but occasionally there can be 30 or more in one area. Bald eagles move to new areas frequently in the winter and occupy a variety of habitats. They are most common at the lakes and rivers along the Mogollon Rim and the White Mountains.

Seasonal monthly helicopter flights, carried out between January and June, help determine statewide productivity (the number of young per occupied breeding area). Biologists visit all breeding areas during one or two days each month to determine occupancy, stage of the breeding cycle, and the result of the breeding attempt. This method differs from the standard monitoring protocol of two annual surveys employed nationwide. However, it helps Arizona biologists by: reducing errors in productivity estimation; identifying the exact stage of the breeding cycle to assist with the planning of projects; scheduling of banding events; discovering new breeding areas to implement protective management; and, identifying prolonged incubation to allow for collection of addled (dead) eggs for contaminant analysis.

Rugged terrain and steep canyons limited bald eagle nest surveys in the early years. Since 1985, a more complete assessment of the breeding population (i.e. the examination of new areas, historical and known breeding areas, and nest sites of other species) has been possible through the use of helicopters. The discovery of new breeding areas and alternate nests, coupled with the knowledge of current and historical breeding areas, allows for an accurate description of the distribution, status, and annual productivity of the bald eagle in Arizona. Timely discovery of new breeding areas allows biologists to address management needs to ensure adequate protection.

To assess the health of the bald eagle in Arizona, biologists started placing U.S. Fish and Wildlife Service bands on nestlings in the late 1970s and early 1980s. Later, biologists used colored visual identification bands to document replacement of breeding adults, natal origin, age of first breeding, and mortality. The Arizona Game and Fish Department and the U.S. Fish and Wildlife Service have continued these efforts since 1991.

Demographic information helps biologists identify factors affecting population viability. Five tasks are necessary to assess population demographics: 1) nestlings must be banded and their sex determined; 2) breeding adults must be identified; 3) statewide productivity data must be collected; 4) mortality sources in each age class need to be identified; and, 5) catostrophic events must be assessed. While it is ideal to accomplish the above tasks yearly with 100 percent success, often logistics and time constraints impede the efforts.

Entering nests to band nestlings can also benefit the species in other ways. It provides the opportunity to collect and remove potentially lethal fishing line and tackle, addled (dead) eggs, eggshells, prey remains, dead nestlings in order to determine mortality, rescue individuals, and to repair or reconstruct nests if they are falling apart. These efforts have been an essential component of Arizona bald eagle management and are particularly beneficial in breeding areas without Arizona Bald Eagle Nestwatch monitoring.

Fishing line can last up to 600 years in the environment. Improperly disposed fishing line can be consumed by, or entangle, many animals including mammals and migratory birds. It can also be hazardous to people hiking, swimming or diving, and to boats. The Arizona Game and Fish Department’s Monofilament Recovery Program encourages recreationists to properly dispose of used fishing line in trash containers or recycling bins to help reduce the risks discarded fishing line poses to wildlife and the environment. Regular cleanups can prevent ospreys, bald eagles, waterfowl, and pets from encountering dangerous and often lethal entanglement. Recycling bins are stationed at local license dealers, tackle shops, boating ramps, and recreation areas throughout Arizona.