We are excited that you would like to know more about archery in Arizona! You will find information on different styles of archery, where you can learn archery and about programs through the Arizona Game & Fish Department.
The magic of archery can only be felt through actions, the experience cannot be felt through words.

Where to learn archery
AZ archery in the schools resource guide

Target Archery
This type of archery is featured in the Olympic Games and consists of shooting at bull’s-eye type, multicolored target faces at a distance. Generally, target archers shoot 18 meters (about 20 yards) indoors and between 30 and 90 meters outdoors, depending on the archer’s age and equipment style.

USA Archery is the national governing body of target archery in the United States, and provides youth and adult programming, instructor certification, and local as well as national competition opportunities.

Field Archery
Field archery is often enjoyed on a roving course set through the woods, or in Arizona’s case through the desert, with paper targets from 20 feet to 80 yards away. This is a great discipline for those who love nature, as you’ll definitely do some hiking. Targets are often set at up and downhill angles. Indoor field archery events are also available.

3D Archery
In these events and tournaments, competitors walk an open course, shooting at three dimensional foam animals at different distances. These events are conducted by the International Bowhunting Organization (IBO) and the Archery Shooters’ Association (ASA).
Traditional Archery: Traditional archery means different things to different people. For some, it means shooting a longbow or recurve without sights, stabilizers or other tuning equipment. Others feel that to shoot traditionally means you must shoot bows and arrows made only from natural materials such as wood, horn and bird feathers.

Bowhunting
Bowhunting consists of harvesting game animals (big and small) using a bow and arrow. It is the oldest style of archery, as well as one of the most ancient models of hunting. Bowhunting in Arizona requires a state-issued license and is allowed only during certain seasons. Bowhunting seasons are typically longer than gun hunting seasons because the harvesting, or success rate, is much lower for archers than for rifle shooters.

There are four main types of bows with several subgroups. 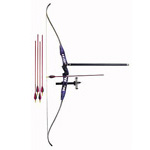 Recurves were historically used by horsemen and now are used in Olympic events. Many archers also use recurves to shoot field archery and 3D archery. If an archer uses a recurve for Bowhunting, they typically use higher poundage.

There are four main parts to a recurve bow: the riser, the upper and lower limbs, and the string. The name comes from the limbs curving out or “recurving” from the center.

This is a type of composite recurve bow renowned for its military effectiveness. 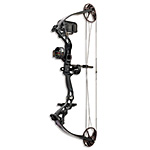 Compounds are known for their widespread use in field and 3D archery, and Bowhunting. Many archers shoot compounds in target archery as well.

Compounds were first produced in the 1960s and involve an innovative system strings and cables around cams to reduce force in the limbs. This system allows an archer to hold the string back for a longer period of time before releasing without causing muscle fatigue.

Compounds are less affected by changes in temperature and humidity than other bows. 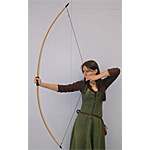 Longbows are one of the first types of bows to become popular appearing back in the 1200s during battles and were the dominant weapon on the battle field until the mid-16th century. Today, longbows are used in all major types of archery including target archery, field archery and 3D archery, and even some are used in Bowhunting.

Traditional longbows consist of a long, slightly curved piece of wood the same height as the archer and do not have any arrow rests or sights. This makes longbows more difficult to aim. These types of bows also do not have as much power as some of the other bows.

English/Welsh Longbow: a powerful type of medieval longbow that is about 6 feet long used for hunting and medieval warfare.

Kyudo: The Japanese asymmetrical longbow used in the Japanese martial art of archery.

Flatbow: a type of longbow used by Native American tribes such as the Hups and Karok of California, or the Wampanoag tribe of Massachusetts. This bow has non-recurved, flat, relatively wide limbs that are approximately rectangular in cross-section, which makes it different from a traditional longbow.

Self bow: This type of bow comes from native cultures in Africa, Central and South America, Oceana, and Australia. A self bow is made from a single piece of wood with extra material such as horn nocks on the ends or built-up handles. 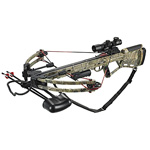 Crossbows are believed to have originated in China and commonly used in battle in the Greco-Roman and Medieval ages.

Crossbows have the appearance of a firearm but really are a short bow horizontally attached to the muzzle. The crossbow is drawn by way of a crank mechanism and released by a trigger mechanism. Crossbows have short firing ranges unless equipped with a heavier draw weight. These bows are frequently used for target archery, but can also be used in hunting. However, be advised that regulations on crossbows can vary between states and some can be quite strict.

Knowing which eye is your dominant eye will help in choosing a bow as well as allow you to keep both eyes open while shooting. Both eyes open provides better depth perception, peripheral vison and balance. Eye dominance is not determined by which hand you use to write with. To determine your eye dominance have a partner stand several yards in front of you. Raise your hands eye level to your eyes. Make a small triangle with your hands and look at your partner through the triangle keeping both eyes open (see pictures below). Your partner will see your dominant eye in the triangle. 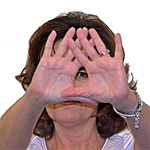 The 11 Steps to Archery Success

The purpose of the 11 Steps to Archery Success is to learn proper archery form, shot execution, and follow-through. If an archer is able to master this process of shooting they are much more likely to enjoy a life-time of success in archery.

Square Stance: Open Stance = “More Stable”
Nock: It’s important that you keep the bow and arrow always in the direction of the target. Be sure there is a click to ensure the arrow is on the string. Odd color fletch should be facing you as the archer.
Draw Hand Set: 3 fingers under the arrow nock.
Bow Hand Set: Set your knuckles of bow hand at a 30-45 degree angle. Form an “L” shape with your wrist and allow your fingers to be relaxed.
Pre-Draw: Rotate your elbow down to the left (for archers shooting with a right handed bow), this allows for string clearance of the bow arm. Point the arrow at the target at all times.

Draw: Slowly and consistently pull the string back.
Anchor: Place your index finger to the corner of your smile.
Aim: Use the point of the arrow as a reference. Be sure to keep both your eyes open while shooting.
Shot Set-Up: A slight movement from your drawing shoulder and /or arm and elbow to the rear.
Release: Open all 3 fingers to let go of the string.

Follow Through: “Paint your face” as fingers relax back brushing your face with your fingertips.
And Reflect: “How was your shot? What do you need to do differently?”